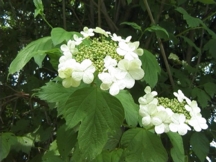 The Guelder Rose prefers to grow at low altitudes and in semi-shade in Scotland and England. It is native to the woodlands of the European deciduous forest. It is found at the edges of woods, hedgerows and marshes. In the United States it is found in agricultural zones 3 to 8, which is a relatively cool climate. It grows in both heavy clay and acidic soil. It was first cultivated in Gelderland, a Dutch province, then introduced to England.

The Guelder Rose is a deciduous shrub and a member of the honey-suckle family. This shrub is also like the Common Elder. The Guelder Rose's flower is snowy white with flat heads which are 3 to 5 inches across. The flower is wheel shaped and the outer flowers have five petals and are sterile. The inner flowers are fertile and very small. They provide nectar for the insects that pollinate them. The flowers turn into red berries. The Guelder Rose is beautiful in August when the berries are ripe, and the leaves turn to a bright red or rich purple before falling. It has maple-like leaves. This shrub can grow to 5 to 10 feet high.

The berries are bright red and attract birds that spread the seeds. The very large white outer layer of flowers also attracts pollinating insects to the inner part of the flower. Some can self-pollinate. Some species are sterile and don't have berries. It is an invasive shrub and will take over another plant's area and is able to spread out for more sunlight.

Its bark is used as an herbal medicine for cramps and asthma. The berries can be used for ink. It is also used as a decorative shrub. In Canada it is used instead of cranberries. It is an importan food source for insects and birds who eat the nectar and the berries.