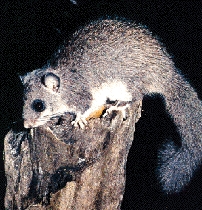 There are 21 different species of dormice. The fat dormouse is the largest dormouse in Europe. They can be found in Africa, Europe, Asia, and Japan. These rodents look like short, fat squirrels with bushy tails. The European and Asian dormice are the largest in the dormice family.

The fat dormouse is at home in European deciduous or mixed forests. In this habitat it can find the food it needs and shelter. It can adapt and thrive in many types of woodland but does not do well in evergreen forests. The dormouse finds shelter in hollow trees, rock crevices or even woodpecker holes. In the deciduous forests the temperatures in the summer months are an average of 70° F. In the winter months the temperature is a little below freezing.

The dormouse is often mistaken for a gray squirrel. Its thick fur is soft and short with a silvery grey color on the upper part and creamy white on the under parts. The dormouse has small, round eyes surrounded with dark circles. It is about 5-8 inches in length and the bushy tail is about 4-6 inches long. The dormouse can weigh from 2.5-6 oz. They have large, round ears and short legs. The muzzle of the dormouse has bristly hairs that extend up to 2.5 inches long.

The large bushy tail helps the dormouse keep its balance while climbing on tree branches. The large ears are used to locate sound and provide excellent hearing. The whiskers help the dormouse find its way around in the night . The dormouse is nocturnal.

The fat dormouse has a life span of five years. Several dormice may share the same home to stay warm. The dormouse mates in June, after waking from hibernation. The dormouse will usually produce one litter per year. A litter can have from 2-10 babies in it. The newborns are approximately 2 inches long at birth. The babies must stay in the nest for several weeks. While staying in the nest with the mother the newborns will open their eyes after 21 days, and grow fur. They are weaned at 5-6 weeks but stay with their mother until their first hibernation. The father does not help in raising the young.

The fat dormouse got its name by eating a lot before going into hibernation. The dormouse is an omnivore, and feeds on apples, pears, plums, grapes, seeds, berries, nuts, insects, and sometimes birds eggs. As autumn approaches the dormouse eats more to have fat and energy for hibernation. By the end of summer, their weight is nearly doubled. At this time the fat dormice will dig a tunnel about 2-3 feet long and 6-24 inches deep. Here they spend the winter safe from frost. Some dormice have been found hibernating in hay lofts or under logs. It is also known as the edible dormouse because the Romans considered it a delicacy. In some parts of Europe it is still eaten as a special dish.

The dormouse has several predators. Their main predators are snakes, hawks, owls, and humans. Humans are cutting down the natural forest which is its habitat. If the dormouse had no forest to live in, it would probably make a home in an old barn house, or a garage, etc. If that happened the dormouse would become a pest to humans and might become extinct.

The fat dormouse is currently on the IUNC near-endangered list. Humans are starting to make an effort to save them. In Europe, many volunteers are building nest boxes to induce the mating process. The volunteers are also monitoring the dormice to keep track of their growing population.