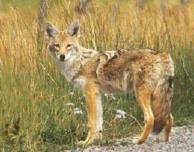 When you think of a coyote, you think of huge, snarling, blood-thirsty wolves, right? Well, that's how I felt when I first started researching these animals. After you read my essay I hope you will have learned more about coyotes and realize that they aren't as scary as you thought.

Coyotes belong to the dog family. They do look a lot like the wolf, but if you got an up-close look then you might see a few differences. For instance, coyotes are smaller, have a narrower nose, and longer ears than the wolf. Grown males are usually 18 to 44 pounds, while females are 7 to 18 pounds. They are 4 feet long, including their 11 to 16 inch tail. Coyotes are a mix of gray, brown, and yellow.

Coyotes used to live in the northwestern United States, but now they are ranging around all states, Canada, Mexico, and Central America. Coyotes live either in pairs or alone.

I would say that there are two different categories that everyone fits into. One goes into a restaurant and knows exactly what they are going to order and they won't eat anything else. Another will go to the same restaurant and just pick the first thing on the menu they see. From researching the coyote I can safely say they easily fit into the second group. What I mean is, they are omnivores, which is a mammal that eats both animals and vegetables or fruits. The Coyotes main diet is rabbits, birds, gopher, prairie dogs, rats,and fruits. In the winter they will eat remains of animals, watermelon, berries, and mesquite beans. Gosh, my mom would like to have them to dinner! She is so used to having my sister and I be picky eaters.

Coyotes mate at two years of age. They are pregnant for 60 to 63 days. The females give birth in the spring to 5 or 6 pups. The pups weigh 7 to 10 ounces, and are born blind. Their eyes open up within 2 weeks. The mother provides milk for 6 weeks, but after that the pups are on their own to find their food.

Not a lot of animals have a better hearing system than coyotes. Their ears move back and forth, pinpointing any noise they hear. This special ability makes it easy for them to find food. Coyotes are smart animals and when they sense trouble, they don't investigate, they run.

Coyotes have a good population. They are the hunters, not the hunted, though some humans think it is fun killing coyotes for sport. You will probably agree with me that taking pride in killing an animal for the fun of it is very dumb. But the coyotes are proud animals and will not be defeated. 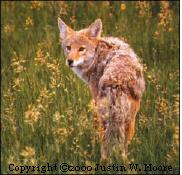 Coyotes can live almost anywhere. They now live in most of North America and Central America, from Alaska to Nova Scotia and Panama. They even live in the suburbs of large cities. People have even blamed them for eating their pets. But the coyote's original habitat was the big open grassland.

Coyotes become mature in 1-2 years, and have about 2 to 12 puppies, but usually 6. Dad stays with his family and both parents take care of the puppies.

When there is lots of prey around, coyotes will hunt alone or in breeding pairs. They eat mainly small mammals, like rabbits and mice, reptiles, fruit, insects. When there is only large prey, like deer, coyotes will form packs of three to eight members. They will stay together only as long as they need each other.

Coyotes are very intelligent. They have a terrific sense of smell which they use to locate prey. Their hearing is very sharp too. They use their ears to tell other coyotes how they feel and what rank they are in the pack.

When coyotes move into a place, they easily upset the balance of that place. They can kill the population of small mammals in a few years. Without the rabbits and mice to eat them, plants will grow tall. Shrubs will crowd together and kill off the grasses. The animals that were depending on the grasses can not live there anymore and will die or move away.

In some parts of Canada and the U.S. there are so many coyotes that they are controlled by an open hunting and trapping season. The same controls have wiped the coyote out in Texas and most of North Dakota. The coyote is protected in 12 states in the US. 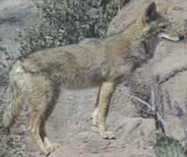 The Coyote has a tan coat mixed with hairs of rusty brown and gray, and the ends of the hair may be black. The different colors help to hide the coyote in the underbrush, rocks, and grasses. The coyote has large, pointed ears and a bushy tail. Coyotes are known for their sharp eyesight, keen hearing and a keen sense of smell. Adult coyotes can grow to be 4 feet long (including the tail which can be 11 - 16 inches long). They can be 2 feet tall and weigh up to 30 pounds.

Coyotes once only lived in Western America, but people have forced them to find other habitats. Coyotes can be found in the United States, Canada, and Mexico. They live in all kinds of habitats including deserts, prairies and mountains. Coyotes have even been found on Cape Cod.

Coyotes eat mostly rabbits and rodents. They also hunt antelope, goats, sheep, and other animals. They will eat insects and reptiles. Dead elk and deer, as well as cattle will become the main food in the northern wintertime. Coyotes will also eat fruits and nuts. As coyotes are forced to move closer to people, they will also eat garbage.

Most coyotes live alone or in pairs. They might live together in larger groups. Coyote families guard and mark their own areas. Pups are born in the spring. A female can have from 3 - 12 pups. Both parents care for and feed the pups.

Coyote's coloring help it to hide in the desert and hunt for it's prey. Coyotes will eat almost anything available to them where ever they are; fruits, rodents, small animals, and garbage. Coyotes are clever animals and adjust to their environment.

Coyotes are not endangered. Their natural enemies include mountain lions and more recently man.