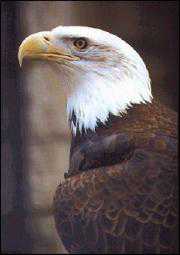 The Bald Eagle is the national bird of the United States of America. It is considered a sea eagle that has a white head. It is large and strong and weighs eight to twelve pounds. Their wingspan can be two meters (seven feet) and they can be larger than a meter from head to tail. The Bald Eagle has a curved beak which is large and very strong. It's toes have talons which are very strong claws. They have excellent vision which helps them to hunt.

The Bald Eagle is found over most of the North American taiga but eighty percent of them are in Alaska. They build several kinds of nests that can be very large and can be in trees, on cliffs, and on the ground. They change the shape of their nests to fit different trees. The Bald Eagle prefers to eat dead animals but will also eat live chickens or fish. They hunt in pairs and will steal food from other Eagles. They do not need to eat every day and will change their diet depending on where they live.

The Bald Eagle is a bird of prey and they will attack for food. Until this year they were called an endangered species but as of July 2000 they will changed to a recovered species.