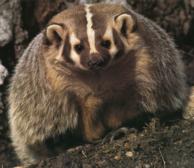 The badger is an animal with a stocky, powerful build, having four short, strong legs and large, sharp claws. It has a long, pointy nose, with a white streak from the tip of it all the way down its back. It also has two white and black patches on its cheeks. It has strong teeth with four longer canine teeth. Badgers have small heads with short, erect ears. They have long, course, brown fur that covers a soft under coat. Its tail is short and bushy. Males are 21-29 inches long and females are 17-26 inches long and their average weight is 9-27 pounds.

The badger is a solitary animal and guards its territory fiercely. They mate in August and September. In the winter, the badger goes underground and goes into a state of torpor, its body processes slow down, and they survive on their fat. The female has a unique process called ''delayed implantation'' of the fertilized eggs. The fertilized eggs are dormant for four months until late winter, then after two months gestation, the female gives birth to one to five baby badgers in the spring. The babies are ten inches long, and are born with soft silky fur and their eyes are closed. The babies need two months to be weaned and then they stay with their mom for two more months to learn to fend for themselves. They reach sexual maturity at 5 - 12 months. The badger lives for an average of 20 years.

The badger is a carnivore, eating mostly meat like small mammals, lizards, snakes, insects and carrion. Badgers are one of the only animals which can kill and eat rattle snakes. Badgers are fearless hunters.

The badger has sharp powerful claws for digging and a strong jaw with sharp teeth for tearing apart meat. The badger has poor eyesight but a keen sense of smell. Sometimes it pairs up with coyotes for hunting ground squirrels. The coyote sees the ground squirrel diving into its hole but can't get it. The badger comes over and digs into the hole, scaring the squirrels out. Both the badger and the coyote get some to eat.

Badgers have no natural predators. They are an important part of the food chain, since they keep the populations of ground squirrels and other small animals in check. However, agriculture, trapping (for fur), shooting, and use of poison have contributed to their decline. Ranchers hate them because they dig up and enlarge small burrows in an effort to capture its occupants, making a hazard for livestock.

Because man has altered the badger's environment, the badger is listed as a Species of Special Concern by the California Department of Fish and Game.