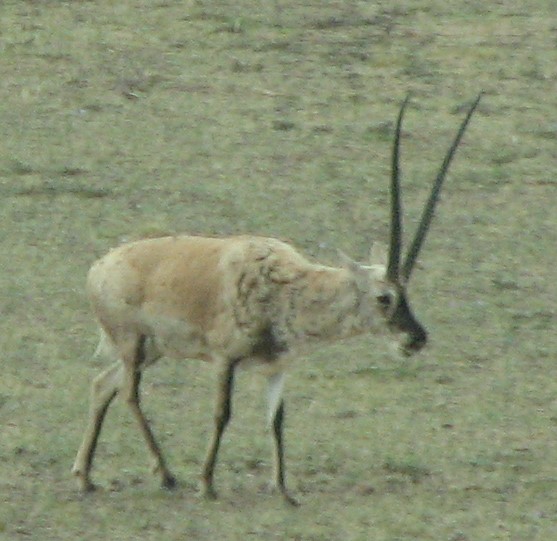 The Tibetan antelope, or chiru, has an undercoat so fine, soft, and warm, that the demand for it is rapidly leading to its extinction. Called shahtoosh (from the Persian "king" and "wool"), the wool makes scarves and shawls so light that they can be threaded through a wedding ring.

Found almost exclusively on the Tibetan plateau region of China, the chiru is one of the world's hardiest animals, able to survive in temperatures of -40°F. It can tolerate these temperatures because of the thick, fine undercoat next to their skin. It prefers the flat and rolling terrain of alpine steppes, alpine meadows, and desert steppes at elevations of 11,000 to 18,000 feet. Temperatures here annually average below freezing with a very short growing period.

Although they are called antelopes these beautiful animals are most closely related to the wild goat and sheep. Their underbellies are white, with gray or reddish brown coats. In the winter males have distinguishing black markings on the front part of their legs, and a black face mask. They have long, black horns about 19 to 23 inches long that curve gently back and then forward again, ending in a sharp point. Males weigh about 77 to 88 lbs. and stand 31 to 33 inches at the shoulders. Females don't have horns, stand about 30 inches tall at the shoulders, and weigh from 55 to 66 lbs.

During mating season, which runs from November to December, the male will separate about 10 to 20 females from the herd for his harem. He will mate with all of them, but he must guard them well since other males will try to lure the females away or the females may try to defect to other harems. Females will first conceive when they are about 18 to 24 months old and bear a calf at 2 to 3 year intervals.

Most of the males will stay in their winter grounds throughout the year, making short trips to find food. Some will travel far from their winter grounds, going north and scattering. In May and June the females and their female calves separate from the herd, leaving the yearling male calves to form bachelor groups, and migrate north to their calving grounds. They will often travel up to 200 miles. They will give birth to a single calf in June or July. Survival for the young chiru in their first year of life is low and at least two-thirds don't reach their second year. In late summer the females and calves, new and old, will travel south again to rejoin their herd.

Lately the demand for shahtoosh has grown very high. Shawls and scarves woven from shahtoosh can be sold for as much as $15,000 United States dollars. The only way to harvest the wool is to kill the chiru. Although the Peoples Republic of China has given them the highest level of protection, the area where the Tibetan antelope lives is huge and difficult to patrol. Poaching and illegal trade has greatly reduced their numbers. Chiru population in 1900 was estimated to be around 1 million. At this time there may be less than 75,000 animals left. Every year about 20,000 chiru are killed. The modern use of snow mobiles and long range rifles has made the chiru more at risk than ever before.

Despite being protected by Chinese laws, the Tibetan antelope is still being hunted mercilessly. One pound of chiru wool can earn a poacher $30. The wool is then transported to India and sold on the world market for $700 per lb. In 1979 the chiru was listed on the CITES Appendix I as vulnerable. In 1991 the Tibet Wildlife Act was passed, and in 1995 the government of India increased the enforcement of their laws. Any shawl or scarf that contains more than 1% of shahtoosh is considered illegal.

Four protected areas have been set aside in China to protect the wildlife species of Tibetan Plateau. However, because the areas are so remote, the moving in of new settlers into the area, and a lack of management, enforcement of current laws is difficult.