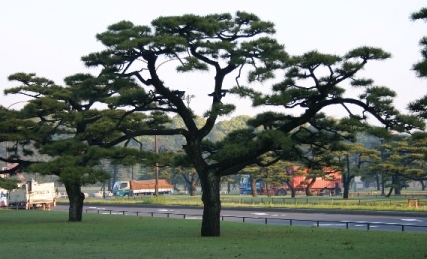 The Japanese Black Pine's habitat is the Northeast Asian Deciduous Forest. The countries that are in this biome are Northeast China and North Korea. It is located between 30° to about 45° North latitude and the longitude is between 130° and 145° East longitude.

Trees thrive in this habitat that has low hills and forested lower hills with many trees like the elm, ash, and firs. It is sort of rocky there. Rain mostly falls in the summer and autumn. The winters are long and cold but the summers are warm. The average temperature is around 24° to 29° Celsius. The average precipitation is between .6 and 1.5 meters. But that is counting rain and snow.

This plant lives in a moist habitat and in a mostly temperate climate. It grows in a rocky and forested area.

The Japanese Black Pine can be 40 meters tall. The crown is dome shape or like an irregular pyramid. The tree grows in an upright manner. The needles grow in pairs of two, and are 7-12 cm long and 0.7-1.2 mm wide. They are a dark green color.

There are two different colored flowers on this tree. The male flowers are yellow and the female flowers are purplish-red. The cones are shiny light brown. They are 3-6 cm long and grow singly or in clusters. The seeds are dark brown to black and are 6 mm long.

This plant is very plentiful in its natural habitat and in the temperate zone. But it is vulnerable to the pollution in Korea because it makes the needles fall off and causes it to die. People try to protect it by spraying it with insecticides to keep the bugs from killing it. One of the organizations trying to help it is called The New York State Department of Conservation.

Hopefully we can figure out a way to stop the air pollution so it will stop killing the trees and not just this tree but also many of our trees.