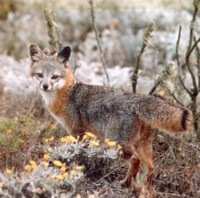 About 16,000 to 18,000 years ago the world experienced its last major ice age. Much of the ocean's water had turned to ice and the level of the remaining seas were lower than they are today. The Santa Barbara channel off the coast of southern California in North America was narrow enough for animals to cross over. One of these animals was a relative of the grey fox. When the ice age ended, and the ice began to melt, the sea levels rose. Over time the foxes found themselves cut off from the mainland on a string of islands. Today the island grey fox can still be found on six of the largest of the Channel Islands 19 to 60 miles off

the coast of southern California. These are the islands of Santa Catalina, San Clemente, San Nicholas, San Miguel, Santa Cruz, and Santa Rosa.

The Channel Islands have a Mediterranean climate which is hot and dry in the summer, and cool and wet in the winter. In America it is know as chaparral. There are many different types of habitats on the Channel Islands. There are valleys and foothill grasslands, coastal sage/scrub, sand dunes, coastal oak and pine forests, and marshes. The island grey fox lives in all of them.

Many people don't even know the island grey fox exists. Its not hard to overlook these distant cousins of the mainland grey fox, they are tiny. They became smaller by a type of evolution called natural selection. Because there is a limited supply of food, water and territory on an island, large foxes had a hard time surviving. But when a small runt of a fox was born, it didn't need as much food or territory. This would enable it to survive to a breeding age and pass its small genes along to the next generation. Over time the foxes became smaller and smaller.

It is actually the smallest fox species in the United States and is almost as small as Africa's fennec fox. It only stand 5 to 6 inches tall at the shoulders and weighs 3 to 4 pounds. Females weigh a little less than males. Its head and body lengths range from 19 to 20 inches, and the tail is about 4 to 12 inches long. The tail actually has two less vertebrae than the mainland grey fox.

The island grey fox looks very much like its larger cousin, the mainland grey fox. Its coat can range from cinnamon, light grey or red, but is mostly a combination of all these colors. The chin, lips, nose, and the areas around the eyes are outlined in black. Its ears, neck and the sides of its legs are usually cinnamon. The tail has a thin black stripe on the top side while the bottom side is cinnamon. Young foxes usually have a paler and thicker fur coat and their ears are a darker color compared to the adults. From August to November the island grey fox molts, or gets a new coat of fur. Their old fur coats fade in color and the tips of the hairs curl at the ends.

Although it is only as large as a house cat, the Island grey fox belongs to the Canidae family, the same family wolves, coyotes and domestic dogs belong to. The island grey fox is also the only carnivore found nowhere else except in California. 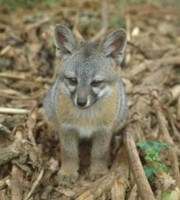 Island grey foxes mate for life, but they only stay together to mate and raise their pups. Then they are off by themselves until the next breeding season. They only breed once a year between January and April. The female, or vixen, will give birth to a litter of kits 50 to 63 days after mating. Litters usually have 2 to 3 kits, but can have as few as 1 or as many as 5 kits. The kits are born in dens in ground holes, hollow trees, rock piles, shrubs, and caves. The parents find these and don't actually make the dens themselves. They are born blind and helpless with short dark brown hair and only weigh about 5 ounces. The mother nurses them during the first 7 to 9 weeks. The kits then emerge from their dens around May to June to begin foraging for food with their parents. They stay with their parents until September. At this time the kits remain near the den while the parents leave to find new territories. These territories are about 1 square mile and usually overlap each other. The island grey fox reaches maturity at about 10 months and will begin to breed at about one year of age. The average life span is 4 to 6 years, but some foxes have been know to live to be 15 years.

The island grey fox is solitary and diurnal, being active mostly in the early morning and in the evening. They hunt mostly during the day, but are known to move around at night. Island grey foxes are called omnivorous because they eat both plants and animals. Depending on where they live their diets can consist of mostly insects and fruit like manzanita, toyon, saltbush, prickly pear, and the fruit of sea-figs. They will also eat deer mice, birds, lizards, land snails and any garbage people leave out.

They communicate with each other through sight, sound and smell. They use their body postures and facial expressions to show dominance, and bark and growl at each other. They mark their territories by leaving a few drops of urine around the borders and leaving their scat in obvious places like trails. This tiny fox is described as being docile, playful and affectionate. When first approached by humans it will growl, but soon it tolerates the human and becomes curious. Not that you should try to pick one up, if you ever see one. That wouldn't be safe for you or the fox.

The island grey fox has been dying at an alarming rate during the last decade. The main causes were discovered to be diseases from domestic pets humans have brought to the islands, and the golden eagle. Because they have been isolated on the islands for thousands of years they haven't built up an immunity to the diseases and parasites brought over by animals from the mainland. Thousand of years of breeding within a small gene pool has also created a small genetic variation, which makes them susceptible to diseases. By 2000 there was a 95% decrease in the population on the northern three Channel Islands over a span of only four years. The National Park Service, which owns some of the islands, won't allow you to bring your dogs or cats into the Channel Island National Park.

Golden eagles are also a major threat to the island grey fox. These beautiful birds haven't always lived on the Channel Islands. They were attracted to the islands by the wild pig population and settled permanently around 1995 when the larger, fish-eating bald eagles died out in the area from DDT, hunting and egg collecting. Their arrival on San Miguel island that year coincided with the first decline in the island grey fox population. At that time there used to be about 450 grey foxes living there, but only 40 survive today. In 1999 the golden eagles began to nest on Santa Cruz and the population there went down from 2,000 in 1994 to only 60 today.

The island grey fox is protected by California state law, and is listed as threatened. In 1996 the IUCN listed Urocyon littoralis as Lower Risk/Conservation Dependent. This means that the island grey fox can't survive unless humans intervene on its behalf. Island grey foxes are dependent on captive breeding programs on San Miguel, Santa Rosa and Santa Cruz for their survival. They are bred in captivity and then taken to other areas to try to raise their population.

In 1999 the National Park Service together with The Nature Conservancy established an Island Fox Recovery Team to look into the problem of the population decline. They recommended that the following things be done:

The Park Service and The Nature Conservancy are also workin on restoring the natural ecosystem and elimination the feral pigs off Santa Cruz Island.

In the spring of 2004 the first two wild kits were born on Santa Rosa. Since the year 2000 no wild foxes had existed on the island. They join 9 other kits and 7 adults who were all raised in captivity.

The National Park Service needs our help to save the island grey fox. Their populations have declined so rapidly on all six Channel Islands that it needs help in raising funds for their recovery program. The National Park Foundation has set up an Island Fox Fund and hope to raise money and spread awareness about this critically endangered species